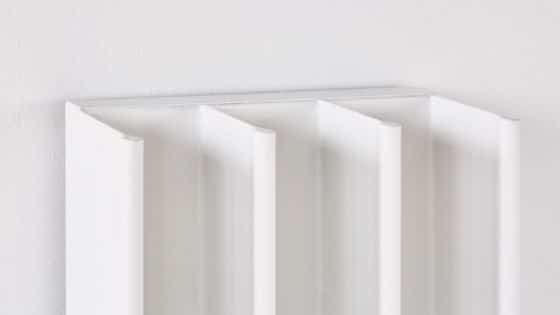 I don’t know about you, but I find it difficult to get out of the shower on a cold winter’s morning. That was before I had a warm cosy towel waiting for me in my heated bathroom! Heated towel rails are becoming increasingly popular with homeowners for a number of reasons. They are stylish, they keep your towels and bathroom warm and comfortable, they are energy efficient and can reduce condensation! There is a vast range of heated towel rails on the market, from low cost to expensive, small to big, made from a variety of materials and can either be hard wired or simply plugged in. The amount of options out there can be overwhelming! Below is some information that should help you make your decision.

Heated towel rails are pretty much all electric these days, and there is a reason for that. The alternative to electric, is a rail that is connected to either the hydronic system or gas central heating. These rails only work when the entire system is on, making them inefficient and expensive to run. Electric towel rails on the other hand are independent systems that can be connected to switches and thermostats which determines when it needs to heat up.

Stainless steel towel rails are the most common type for a reason. They are energy efficient as they hold heat well, however they do easily show up finger marks. Stainless steel, although still widely sold, may soon become outdated due to the range of designer rails opting to use other materials.

Chrome is a popular choice for minimalist and modern rooms. It is a tough material that should last a while, but can eventually peel and bubble due to the constant heat pressure.

Aluminium towel rails are reasonably new to the market. It has high thermal conductivity and a low thermal mass, making it efficient and quick to heat up, not to mention stylish.

As you may be aware, the ladder rail is by far the most common style of rail on the market. Non-heated towel rails are quickly becoming replaced around the world with heated ladder rails. They come in a large range of colours, shapes and sizes making it easy to find something that suits your home. Ladder rails are mounted on the walls, they look neat and can easily be placed in a small bathroom that has little floor space

As an alternative to the ladder rail, individual rails can also be a stylish choice that can easily be customised to your bathroom. Individual rails have connector strips inside the wall so that the rails can be individual mounted, giving them a floating effect.

These rails offer you the flexibility of moving your rail around. Free standing rails tend to be easy to install as they usually just plug into an outlet.

Heated towel rails can be either simply plugged in, or hard-wired, with some companies offering both options for the same products.

These need to be installed by a qualified electrician as they are integrated into your homes electrical system. When your rail is hard-wired the wires run through the wall and can’t be seen. They can be operated by a switch on your wall.

Plug in heated towel rail simply plugs into the nearest wall socket like any other appliance. These rails are the easy and cost effective option that allows you to use your rail straight away. However, they are not as safe as a hard-wired rail. They also don’t look as neat. When using a plug-in unit make sure that you avoid getting unnecessary water around the unit.

Thermostats allow you to choose the temperature that your rail stays at, keeping you safe and your towel at the right toastiness for you.

Both plug in and hard-wired systems are used on a timer (depending on the product). The use of a timer means that your rail will turn on automatically at the same time every day, meaning that you’ll never have to go without a warm towel after your morning shower!

Size of the towel rail

The size of heated towel rail you choice may depend on a couple of factors:

If you have a big family and a big bathroom, you may as well opt for a large rail! The larger the rail the more towels you can dry effectively. You can even dry wet bathers on them. You do need to consider however, that the larger the rail the more energy it uses. Therefore if there is only 1 or 2 of you, you may be better off getting the smaller rail to save money and space.

As you can see there are a few factors to consider and a wide range of options out there! There is something to suit everybody. Getting out of the shower doesn’t have to be a chore!  So go on, take a look and you’ll be sure to find something for you.

Renovating? You could eligible for a 25k grant…

Stay home and plan your next renovation project.